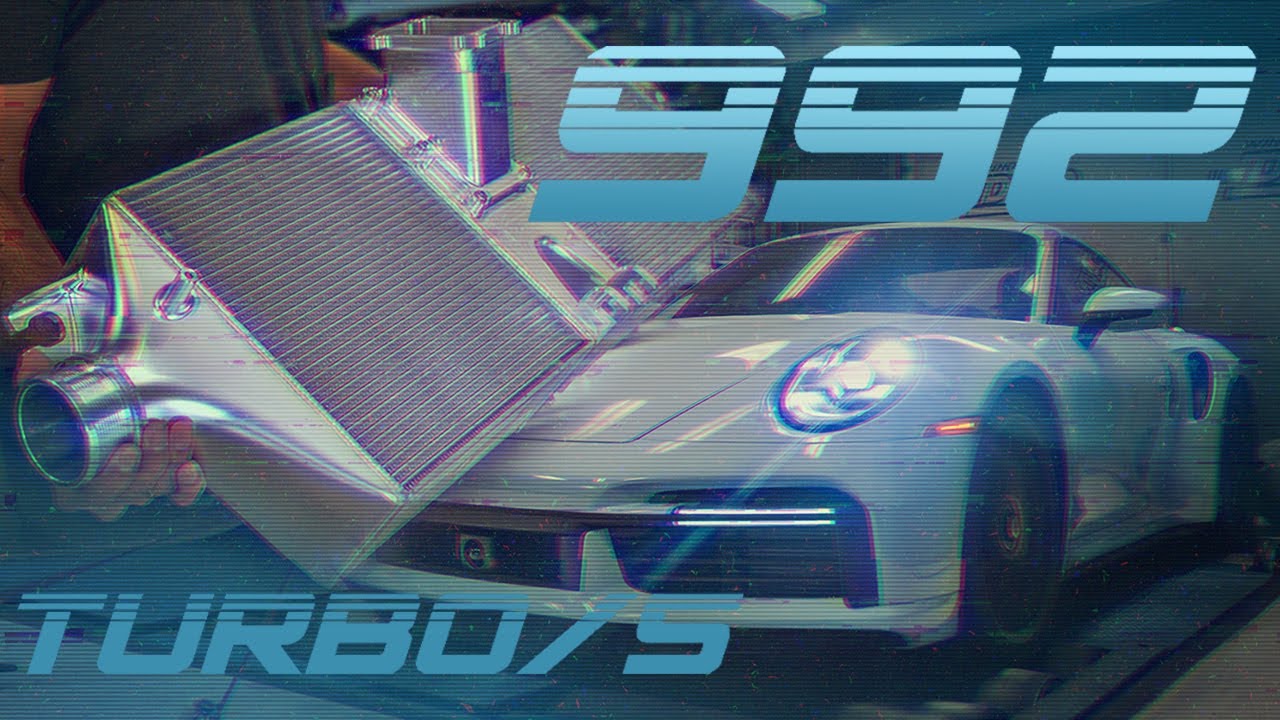 Turning the corner into 2021, the second year of CSF's partnership with Formula-1 Cooling manufacturer, PWR, CSF is excited to officially release to the public the world’s first and only high-performance intercooler upgrade for the new Porsche 992 Turbo and Turbo S (CSF #8188). 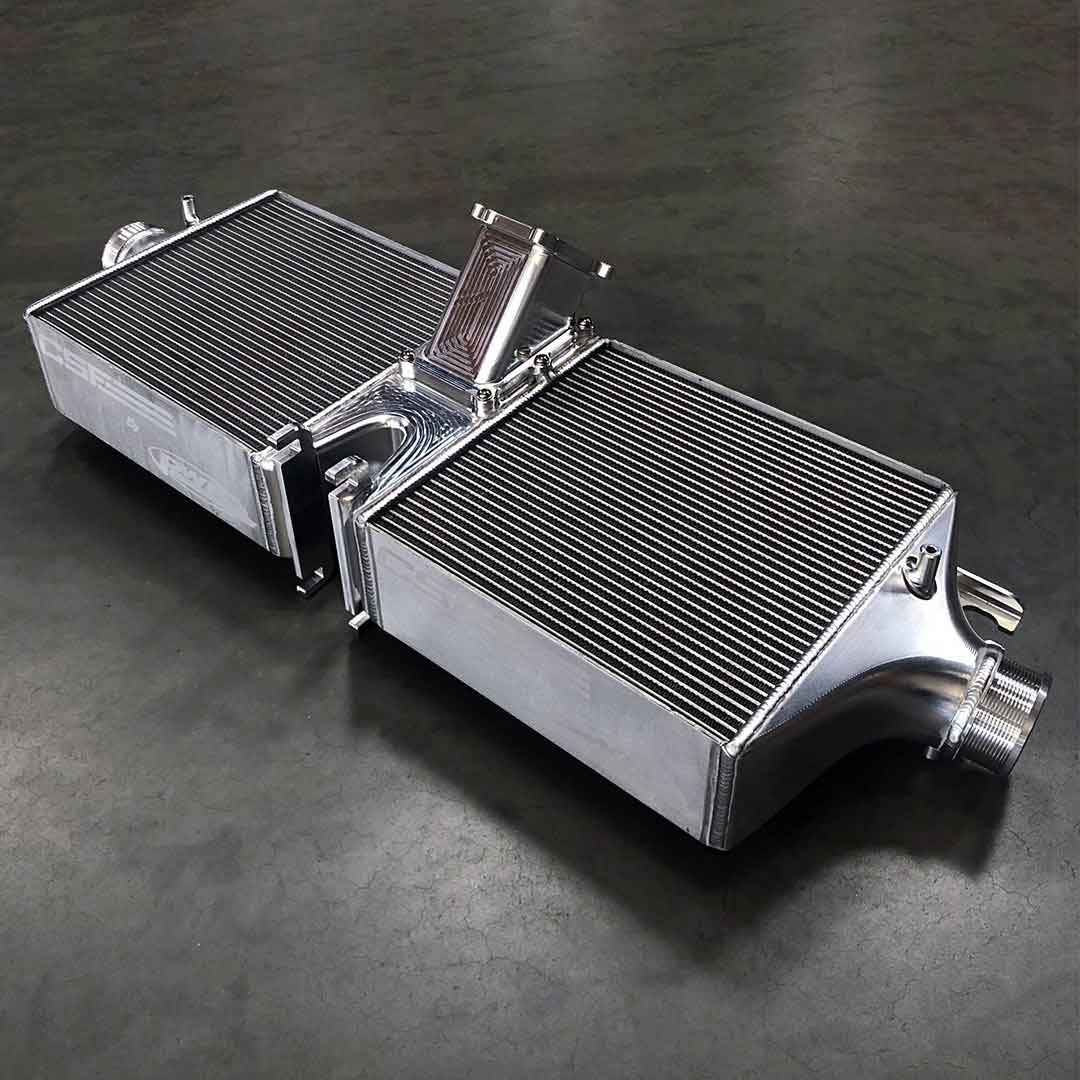 With increased power, also comes higher levels of heat generated by the engine system. This is why an upgraded intercooler system is especially important in a turbo application. The new CSF 992 Turbo/S Intercooler System is a “must-have” bolt-on modification, considering the placement of the intercooler system on top of the engine.

Since the inception of the first water-cooled Porsche 911 Turbo with the 996 variant in 2001, the Turbo has been regarded as “the everyday supercar.” With each subsequent model, from 997, then 991, and now with the new 992, the boundaries of usable performance have been pushed on the street, racetrack, and drag strip. The Porsche Turbo is one of the most advanced tuning platforms around the world, with modifications ranging from simple bolt-ons and tunes to built engines, upgraded turbos, and standalone ECU management systems on vehicles pushing well over 1,000WHP. 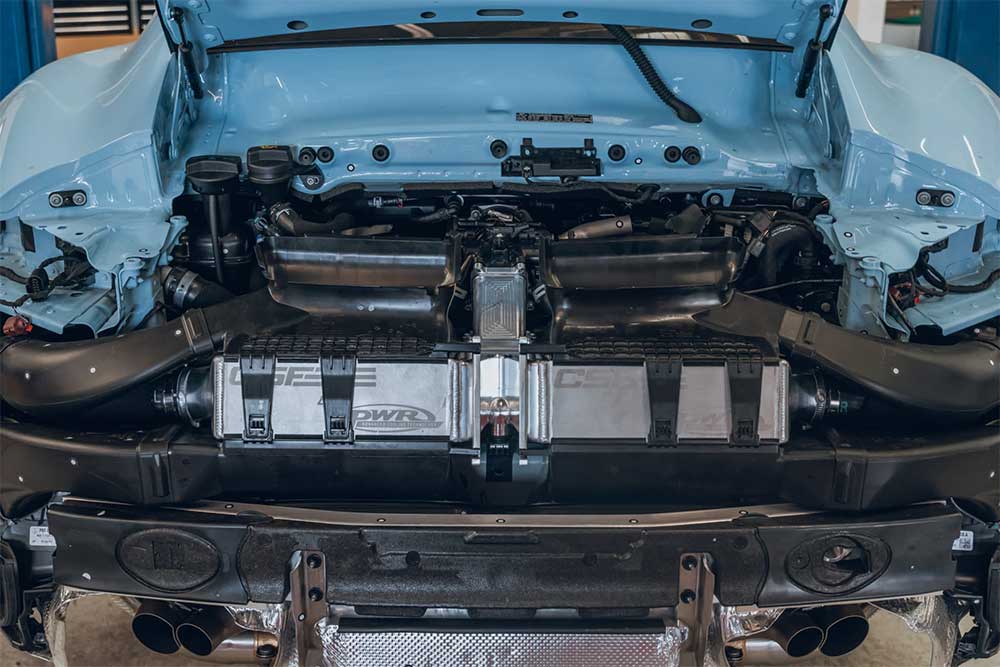 The most important feature of the CSF by PWR 992 Turbo/S Intercooler System is the Formula-1 grade intercooler core. CSF’s strategic relationship with PWR has allowed the inclusion of this core, which is unlike any other available in the performance aftermarket.

The most apparent difference of the high-performance intercooler system from CSF is the beautiful 100% TIG-welded all-aluminium construction, compared to the OEM crimped-on plastic tank design. This feature is especially important in high-boost applications, where the plastic tanks can crack under the stress of higher pressure, or on the racetrack due to higher vibrations. 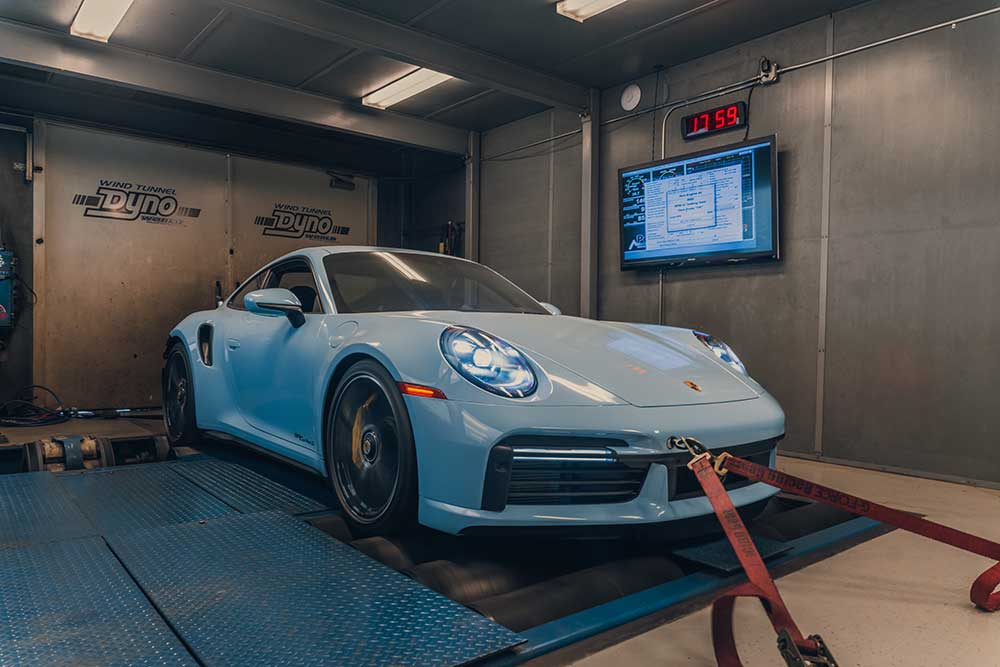 Working with both Jon and Mitch, owners and lead tuners of M-Engineering, to compare the OEM intercoolers vs. CSF’s High-Performance Intercooler System on World Motorsports‘ state-of-the-art wind tunnel dyno

Below are charts of the data from two pulls, one with the stock intercooler system, and one with the CSF High-Performance Intercooler System. These tests started in 4th gear at 2500RPM, went through a shift into 5th, and then to redline.

Note: Both tests were completed on the same day with the OEM intercoolers tested first at approximately 9:00 AM with much lower ambient air temperature and density altitude (DA). The CSF intercoolers were tested at approximately 2:00 PM. The stock intercooler run had about 40°F cooler intercooler inlet start temps & 20*F cooler IC outlet temps at the start of the pulls, therefore this data has been normalized for real-world results and fair comparison. The spike in boost pressure displayed on these graphs is representing the shift from 4th to 5th gear when the throttle closes slightly.

The CSF intercooler system has proven to be much more efficient throughout the entire rev range, particularly at very high intercooler inlet temperatures (start of the run).

The CSF intercooler system (left) side-by-side comparison to the OEM (right), showing better results in intake air temperature (IATs) and intercooler efficiency, all while being tested in hotter conditions. (Orange line on the CSF graph on the left-hand side shows improved performance by approximately 25*F at the end of the 5th gear pull)

Due to the larger and more efficient cores, the CSF intercooler system displayed a slightly higher level of pressure drop with a range of .5 to 1 psi more than the OEM system throughout the dyno test. This is generally to be expected – more surface area, more drag – but with increased cooling efficiency, which the CSF intercooler system provided. Tuning can compensate for this slight increase in pressure drop as well as provide maximum performance output, which can take advantage of the efficiencies and higher performance that the CSF by PWR High-Performance Intercooler System provides.

Prices are subject to change without notice.

Scuderia Autoart reserves the right to vary prices in the event of changes due to the exchange rate, price increases, tax changes, import changes or any other reasons. Scuderia Autoart does not accept any liability for increase in prices. Quotes on pricing are appropriate to the particular product at the time of quoting and may change.

We may collect the following information:

What we do with the information we gather

We require this information to understand your needs and provide you with a better service, and in particular for the following reasons:

We are committed to ensuring that your information is secure. In order to prevent unauthorised access or disclosure, we have put in place suitable physical, electronic and managerial procedures to safeguard and secure the information we collect online.

A cookie is a small file which asks permission to be placed on your computer's hard drive. Once you agree, the file is added and the cookie helps analyse web traffic or lets you know when you visit a particular site. Cookies allow web applications to respond to you as an individual. The web application can tailor its operations to your needs, likes and dislikes by gathering and remembering information about your preferences.

We use traffic log cookies to identify which pages are being used. This helps us analyse data about webpage traffic and improve our website in order to tailor it to customer needs. We only use this information for statistical analysis purposes and then the data is removed from the system.
Overall, cookies help us provide you with a better website by enabling us to monitor which pages you find useful and which you do not. A cookie in no way gives us access to your computer or any information about you, other than the data you choose to share with us.
You can choose to accept or decline cookies. Most web browsers automatically accept cookies, but you can usually modify your browser setting to decline cookies if you prefer. This may prevent you from taking full advantage of the website.

Links to other websites

Our website may contain links to other websites of interest. However, once you have used these links to leave our site, you should note that we do not have any control over that other website. Therefore, we cannot be responsible for the protection and privacy of any information which you provide whilst visiting such sites and such sites are not governed by this privacy statement. You should exercise caution and look at the privacy statement applicable to the website in question.

You may choose to restrict the collection or use of your personal information in the following ways: